Where is Honduras exactly, and where do you go? 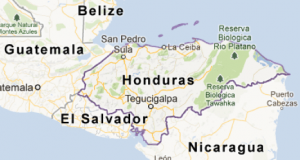 Honduras is in Central America, snuggled between Guatemala to the West, El Slavador to the south, and Nicaragua to the East. It has a northern coast on the Caribbean and a small southern coast on the Pacific in the Gulf of Fonseca (check out Google Earth to see the exact location). We generally visit Tegucigalpa, the capital city, toward the center of the country; San Pedro Sula, the main commercial city, in the north west; ; and Copán Ruinas, the site of the Mayan city. We also spend time between Agua Blanca and Talanga, an hour north of Tegucigalpa and have worked in Amerateca, about an hour west of Tegucigalpa and El Porvenir, just west of La Ceiba, which is further east along the coast from San Pedro Sula. In 2012 we worked for the first time in Copán Ruinas with Paramedics for Children and we will return in 2013. (Explore the photographs of previous trips and of this year’s location and descriptions on this site to learn more, check out the YouTube video, or send an email to the board.)

Honduras is the second poorest nation in the Western hemisphere. It is rich in love, culture, and natural beauty, and it has a growing middle-class. However, if you don’t have money in Honduras life is pretty tough. [more to come]