We left Drew at 5:45 fueled by Dunkin Donuts coffee courtesy of Rita’s amazing mom—who also joined the car pool to take us to the airport.  We arrived in San Pedro Sula, Honduras, and then took a bus for the 4-hour ride to Copán. The bus climbed steadily for several hours, passing through small settlements and larger towns with street markets, bicycles, and increasing poverty on the outskirts. As we got closer to Copán it started raining, light at first and then torrential, but finally we arrived at Copán Ruinas, turned the corner, crossed the river, and stopped at Hacienda La Esperanza (a bed & breakfast run by Rodger Harrison of Paramedics of Children, our host and 2012 community partner). The property is beautiful and as we unloaded our bags and walked through the courtyard everyone was smiling. DHP 2012 begins! 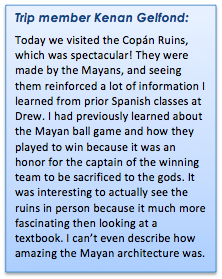 After a wonderful breakfast we walked to the Mayan ruins that put Copán on the map. We toured the site and the museum led by a tour guide who gave us a good sense of the history and culture of the area. The ruins gave us were plenty of photo opportunities as we tried to imagine how it would have felt to live in such a different culture with such a radically different world-view and set of religious practices.  We were struck by the stories of foreign archaeological groups who helped to recreate the site, but who also all took parts of it back to their own museums.  Without them the site would not be so spectacular, yet we wish they had left everything there—an important lesson about the role of outsiders and the importance of respecting the integrity of the host culture. 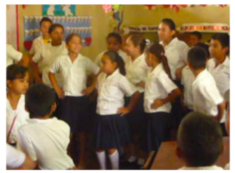 This morning we piled into the back of the “mule” and the pickup truck and made our way to our first school, Escuela Cacique Lempira, in Hacienda Grande. We were accompanying Rodger and Marco Tullio as they travelled to mountain schools to distribute the results of a health survey and check in with the schools–and we would get to interact with the children once they had reviewed the health data. Although the annual school supply donations have been made, we had pencils, stickers, and other small items for the children—in addition to lollipops. 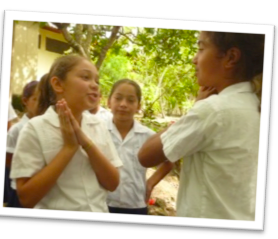 The road up to the school is a mass of flowers, with purple, pink, and lavender bougainvillea cascading over fences and walls. Hacienda Grande is not a wealthy community, but the houses are well maintained and the school is solid, clean, and organized, as are the children. We noticed a lot of children wearing Tom’s shoes, reflecting the poverty of the community, but also the organization and infrastructure necessary for Tom’s to be donated (they make shoes for each child and replace them as the child grows, necessitating an organized community and consistent school attendance). 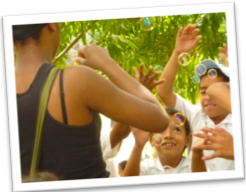 We stopped outside the kindergarten and gave lollipops to a group of very shy children, then walked into the school where we visited two classrooms and in each one the students sang for us.

The children gathered in front of the school to look at their pictures in the health survey, and then we played with them and gave out pencils, stickers, and other small items. The girls had lots of clapping games to teach us, while the older boys played soccer. The biggest hit were the bubbles, though. Children chased them down the hill, laughing as they caught them. 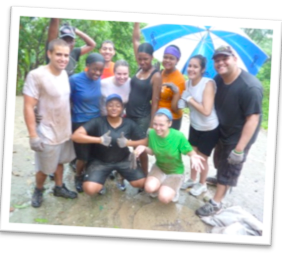 When we returned from the school we started the process of shoveling sand that had been  dredged from the river into the back of the pickup truck. Our main work project was to carry the sand up the side of a mountain to a family who would use it to build an adobe extension to their house, allowing their disabled son to remain in the home. Torrential rain was our cue to return to the hacienda for lunch, hoping for a dry afternoon.

Luckily it stopped raining in the afternoon and we could get started on the sand. We part filled rice sacks and then passed them hand-to-had up the hill so that we did not walk up and down in the mud, making it harder to climb for all involved. The bags were heavy and the work hard, but the group worked as a team and made good progress. During one of our breaks the woman who lived at the bottom of the hill gave each of us a fresh tortilla she had just cooked on the stone stove outside her house. Fortified and moved, we moved the contents of one and a half pickup trucks before the rain began again and the hillside became a waterfall forcing us to stop work. 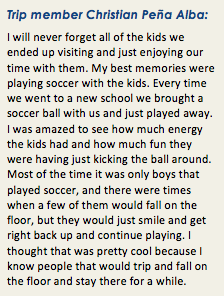 This morning we visited our second school, Escuela Coralitos, in the community of Modesto Rodas. This school is way up the mountain with a large field outside the school fence and a soccer pitch down the hill from the school. There were horses grazing at the side of the field and houses around it. We did not go into the school, but the children played soccer and various organized games (including three-legged races for the girls), and chased bubbles with even more energy than the children in Monday. 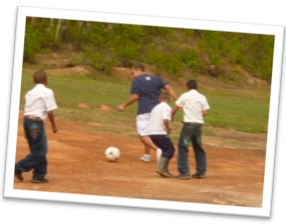 Like yesterday, there were a lot of children wearing Tom’s shoes, and most wore school uniforms as well. The teacher said that when children experience people like us who are different than them, their minds open wider and they are able to learn things they could not learn before. And our minds opened wider as well. 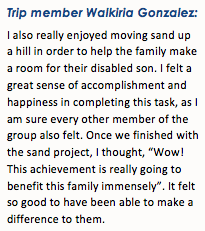 In the afternoon we finished the sand!  We had expected this job to take all week, but it turned out they needed less sand than we had thought, so in a superhuman effort, the sand-bag chain moved hundreds of bags of sand, whilst entertaining the children with our songs and lollipops.

We passed bags person-to-person one third of the way up the hill, piled them up, moved to the next third of the hill and began the process again, finally passing the bags to the couple who will build the room.

Today a child from the house on the other side brought a bowl of mangos for us to eat when we took a break. And they were the sweetest mangos in many ways. 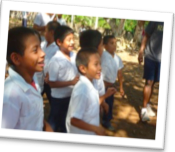 This morning we visited our third school in the community of Llanitillos. The school is beautiful, with blue and white banners strong across the playground and a huge flame tree casting shade while the children played. The children were clearly from poor families and many of them wore Tom’s shoes, but most also wore school uniforms or at least white shirts. There were about a hundred children in all, ranging in age from very small to about fourteen. The principle seemed strict, but they clearly adored her and she enjoyed watching them play with us. 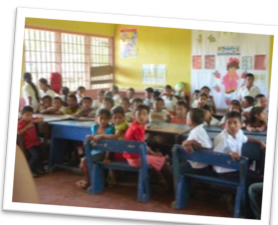 Today we visited the school in the community of La Laguna—and there is indeed a large lake right outside the village.

This school is different than the others in several ways. It is made up of two separate buildings next to each other with only a small area in front for the children to gather, and no area for them to play aside from a huge field across the road—where there is no shade. Unlike at the other schools, the children seemed all to be quite young, and only a few wore school uniforms. 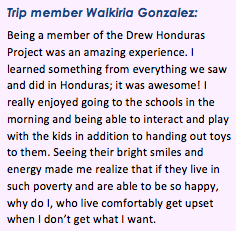 At the other schools, the students wore white t-shirts or blouses and blue jeans if they did not have uniforms, but here the children wore a rainbow of colors. Several lacked shoes. Perhaps because the community had suffered several deaths, or because of the heat or general poverty, the children were less energetic than at the other three schools. Once they got started, though, soccer and a game of catch with a big beach ball seemed popular as little children ran giggling down the hill after the ball that they seem to have missed on purpose! 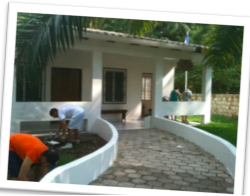 After another amazing lunch we finished sanding and painting the wall around the community health clinic. This clinic is operated by Paramedics for Children, our hosts for the week, and is surrounded by flowers and shaded by trees with a pleasant exterior and interior. Asked why appearance is so important, Rodger Harrison, who runs it, tells the story of an old woman from the community who walked into the clinic and said “This looks more beautiful than the clinic for the rich people. It makes me feel important when I come here and proud to know poor people can be treated this way.” Then he asked a question of his own: “Why do we ignore aesthetics when we are creating facilities for those who have less than we do? Don’t they deserve to be surrounded by beauty as much as anyone else?”

There is so much work to be done in Honduras, but that does not mean we should cut corners or provide services that are less than we would want for ourselves. 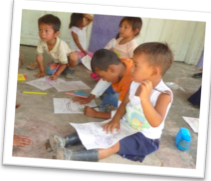 This morning we visited Escuela Jose Suehite in the community of Carrisalito. There were even fewer children at this school than at yesterdays — even though the enrollment is about 100 there were fewer than 40 students there and most of them were young. The older students had been taken out of school so that they could work in the fields to help support their families. Few of those who were there wore uniforms or clean clothes and many were in need of shoes. 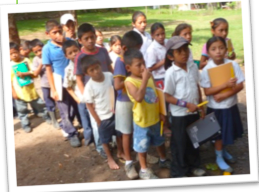 Once again we see the complexity of poverty. If education is not seen to provide tangible benefits it will not be considered important, and when people are really poor there are more immediate things to think about than the possibilities that education might provide. And yet, the children here welcomed us and seemed as eager to learn as any we have met. They were certainly pleased to receive school supplies, especially colored pencils. 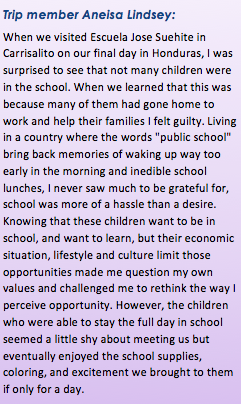 We entertained them as well; one girl caught a bug and teased some of the group members, chasing them around the schoolyard with peels of laughter. The children loved to color, and were very skilled at staying between the lines, while others joined in races and games in the shade of a huge mango tree.

When we left Escuela Jose Suehite we had one last institution to visit. This one is in Copán and is an orphanage/day care center rather than a school. Paramedics for Children pays for milk to be provided for the children each morning, and we went to confirm that the milk was being delivered. The building is beautiful from the outside, but it was hard to stomach the close air and the smell of urine inside. There was very little furniture (a desk and a few chairs at the back of the room, and the children were all sitting on the steps facing the door when we arrived. 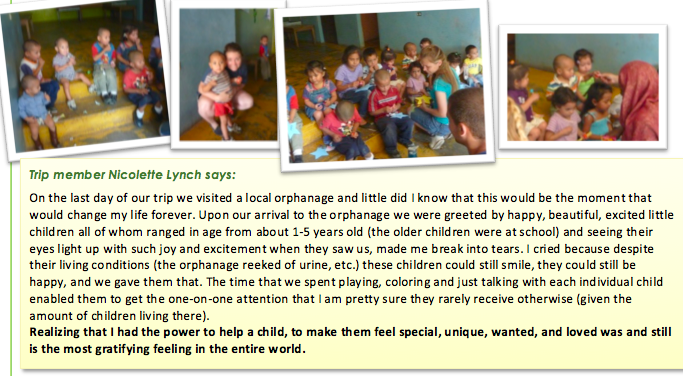