In 2015 we will be returning to the Dominican Republic and el Hogar de Niñas María Madre de Dios again, and this year we will be fixing the play areas at the back of the home and building picnic tables, repairing the see-saws and swings, and a building a climbing frame (we hope). The see-saws were broken and splintered and the swings are rusty and creaky so we are particularly excited to do this work–along with painting and organizing lessons. 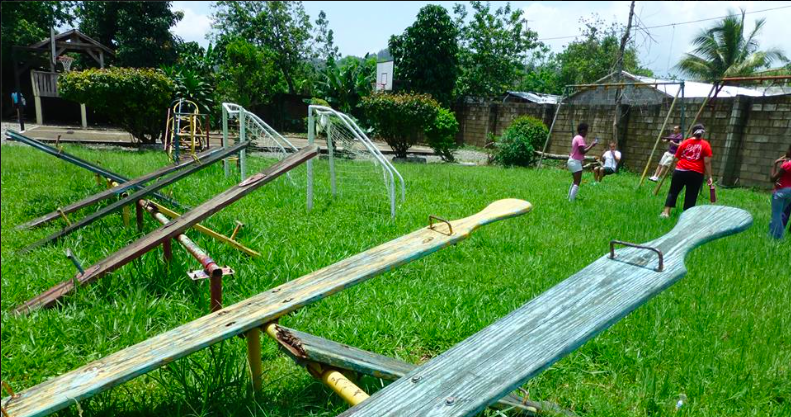 This year there are 40 girls, so we imagine we will be particularly busy

This year we returned to el Hogar de Niñas María Madre de Dios, exploring Bonao and surrounding areas, visiting the school the girls attend in Bonao, and continuing to paint and work on maintenance projects. We also taught English and computer classes, so now we are all FaceBook friends with the girls! 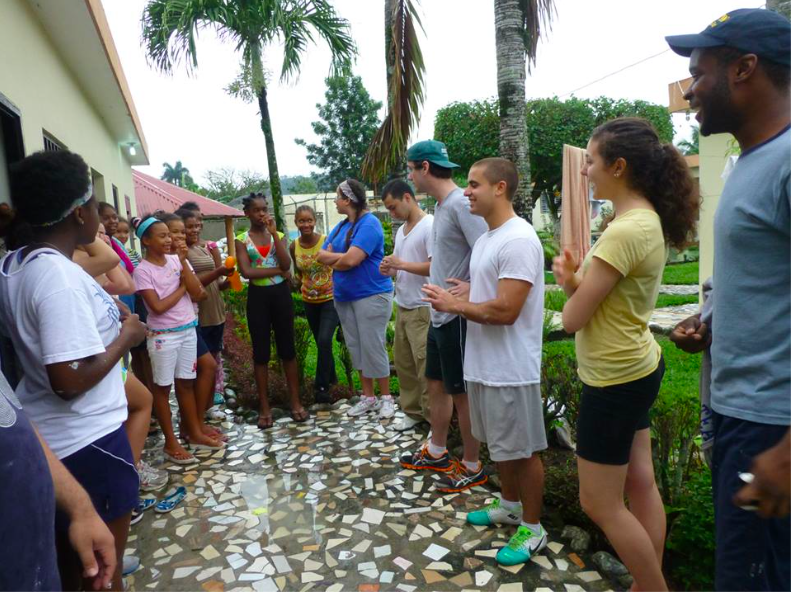 This year we were unable to return to Hondur 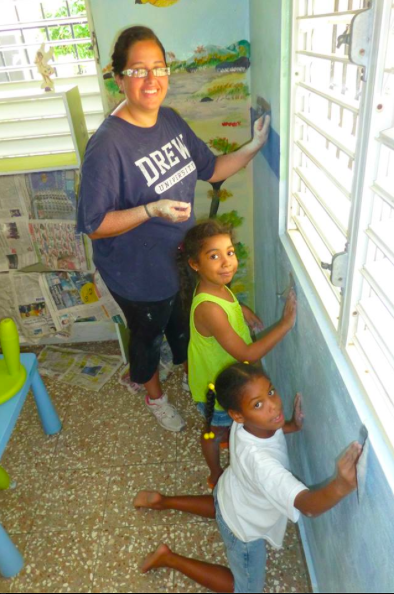 as because of the US
State Department warning. But we have been invited instead to volunteer at el Hogar de Niñas María Madre de Dios, in Bonao, Dominican Republic,  a home and school for girls in Bonao, in the middle of the Dominican Republic in Monseñor Noel province run by the Catholic church. We are sorry not to return to Honduras this year, but we will continue to make donations to the groups we have worked with for so long. On the other hand, we are excited to explore a new country and we know that we can help these children just as we always do. We will take don
ated clothes and toys in our checked-in luggage, so please contact us if you would like to make a donation. 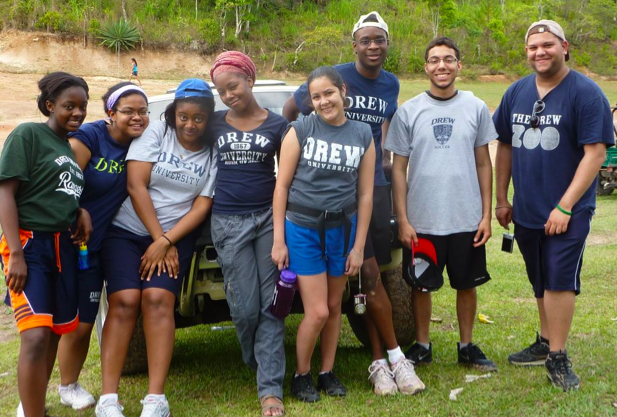 Unlike the last few years, the 2012 trip was only one week long. Instead of dividing our time between two locations, we spent our entire time in Copán Ruinas, in the north west of the country. Our Community Partner was Paramedics for Children, an organization that our faculty advisor has supported for many years but that we have never been able to work with before because they can only take twelve volunteers at once. We stayed at the Hacienda La Esperanza run by Rodger and Pam Harrison. The money generated by this beautiful bed and breakfast supports much 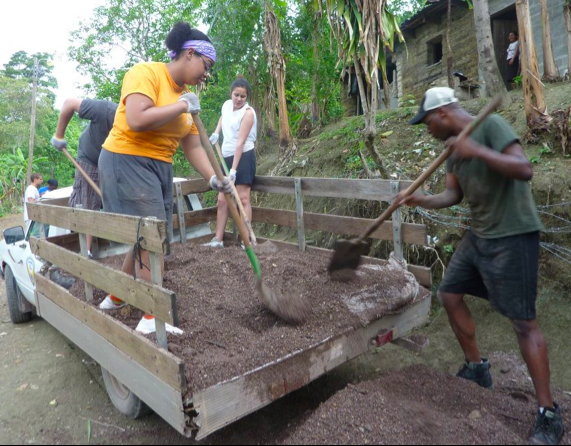 of the work of Paramedics for Children, and provides easy access to the Health Clinic, the town of Copán, and the surrounding community supported by the group. Please check out their website and consider supporting their work if you can.

One of our work projects was to help construct an extension to a house so that a sick child can remain with his family. We also visited schools in the surrounding areas delivering the results of a health survey–along with toys, donations, and lots of laughter. 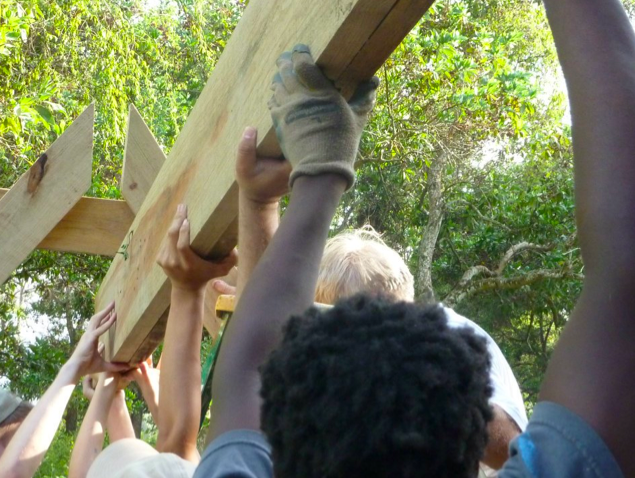 In 2011 we divided our time between El Porvenir on the northern coast of Honduras near La Ceiba, and the Agricultural School of El Hogar Projects in Talanaga, an hour north of Tegucigalpa. In El Porvenir, our Community Partner for the first week was  Honduras Children, which works in El Porvenir to support the local community and particularly the children.

The group supports the Kinder/day care program started in 2005 by Charlie and Amalia Kirkhum for local children whose parents mostly work in the surrounding pineapple fields. The children are provided with breakfast and provided with the skills they need to move on to first grade at one of the local schools. 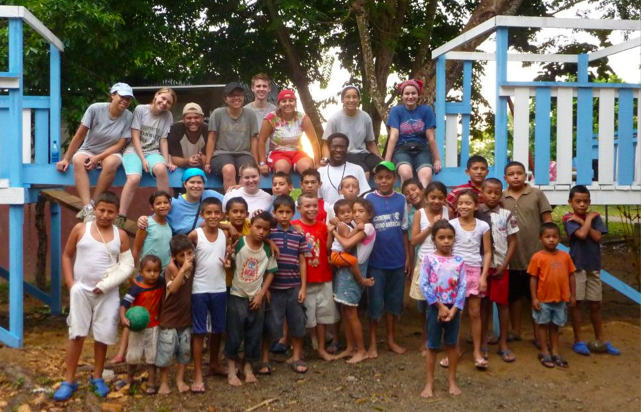 A total of 23 children graduated from the kinder in November 2011. The Drew Honduras Project worked at a local school, cleaning up the playground and building a play area for the children. In our down-time we played with those children, helping them with homework and art projects and running around a lot. 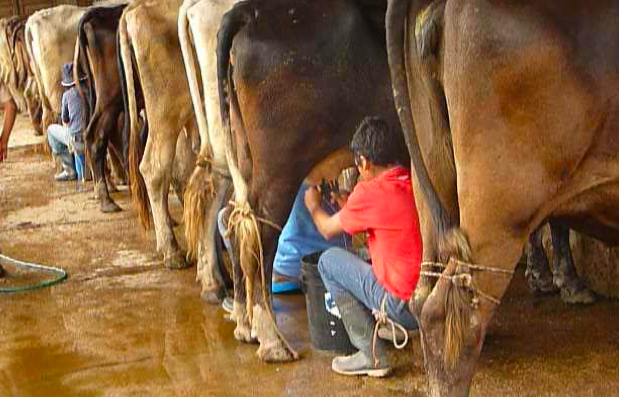 We spent our second week in Talanaga, working again with El Hogar Projects, with whom we have volunteered since 1993. (See below). We joined the boys in their chores every day, and painted a dormitory while the boys were in class and studying for examinations. 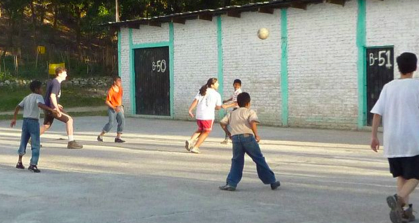 In our down-time they challenged us to soccer, chess, connect four, and other games–and we lost a lot!  The boys are excellent soccer players and play every day on this cement pitch under flood lights Drew purchased for them a decade ago. They have a full size grass pitch down in the fields for daylight play.

The Work of the Project:

For many years the trip was divided between Tegucigalpa, the capital of Honduras, and San Pedro Sula, a major economic center. The trip began in San Pedro Sula where group members used to volunteer in the home for girls (Nuestras Pequeñas Rosas), formerly an Episcopal home for girls, now a privately run home for girls, and the village known as Christo Rey after its church. Since Hurricane Mitch, the group has worked in other sites close by such as at Colonia Episcopal and Suyapa, both in Puerto Cortés. Whilst in San Pedro Sula, the group stays at The Hotel Gran Sula, on the Parque Central in the heart of San Pedro Sula, and works during the day on projects such as painting, mixing cement, or moving building supplies to where they are needed at various different work sites (supervised by Honduran builders and craftsmen). On early trips with 20+ participants, the group divided their time between the various locations as needed, but now that the group is smaller we focus on one site for the duration of this part of the trip.

Examples of our work in the San Pedro Sula area include the following: In March 1998, the program volunteered at a government-run day care center (El Guardelaria) in Puerto Cortés in addition to painting and clearing land behind Nuestras Pequeñas Rosas–“Our Little Roses” [Las Rosas – see below.] In May 1999, the group worked on painting the Ginger Buice Home for girls who have graduated from Las Rosas and are attending college–the girls pay a nominal rent and their share of the household bills. (The group worked on construction of this home on its first trip to Honduras.) In January 2000, we added La Colonia Episcopal, also in Puerto Cortés, where people displaced by Hurricane Mitch are rebuilding their lives and building homes for themselves with the help of the Episcopal Diocese of Honduras. In May 2002, half of the group helped to build another house at La Colonia Episcopal while the rest of the group worked on the foundations for a school at Colonia Suyapa, also in Puerto Cortés.

Beginning in May 2003 we moved from the San Pedro Sula area, working both weeks with El Hogar Projects (see below) as they constructed a new technical institute in Ameratca for our first week. We still visited San Pedro Sula, but have not worked in the area since 2002. Our next big move occurred in May 2008 when we began working in the La Ceiba area during one of our weeks in Honduras. In May 2008 and May 2009 we worked with Helping Honduras Kids, volunteering in their in a children’s home where we painted, planted a graden, and cleared the area behind the house in addition to playing with the children of course. In May 2010 we again stayed in El Porvenir, near La Ceiba, and volunteered with SOS Children’s Village, and in June 2011 we worked with Honduras Children in El Porvenir.

Traditionally, Midway through the trip the group has travelled south-east to Tegucigalpa, where students stay at the home for boys (El Hogar de Amor y Esperanza–see below) interacting with the boys and working on improvement projects under the supervision of Honduran employees of El Hogar. When it was larger, the group was often divided, with some members staying at the main home and others at The Episcopal Agricultural School and Farm (La Finca) or Saint Mary’s Technical Institute, where older boys go once they graduate from El Hogar. (After graduating from sixth grade, each child from El Hogar spends a year at the farm receiving general education and training in agriculture and animal husbandry. Then they can opt to spend another two years at the farm or go to St. Mary’s Technical Institute for three years of further education and training to become carpenters, welders, or electricians.)

Examples of our work with El Hogar include the following: In May 1999, half of the group helped students prepare for a city-wide science fair (which the boys won) while the other half worked at La Finca, where they helped construct pig houses to replace those destroyed by Hurricane Mitch. In January and May 2000, the whole group worked on a new basketball and soccer field, Cancha Peter Kyle (named in memory of a former director of El Hogar). In May 2001, half of the group painted a dormitory (Casa de Tigres) at El Hogar, while the other half painted inside and outside the buildings at the Technical Institute. In May 2002, the whole group worked to widen the front gate and fix the entrance, driveway, and parking area. Students also helped to take care of the children, prepare food, and sort laundry. In May 2003 we began volunteering every year at the Agricultural School in Talanga, working on repairs, painting, and building projects. May 2012 is the first year that we have not worked with El Hogar Projects because our trip is shorter this year.

Before leaving the San Pedro Sula region, the group sometimes visits Copán, the Mayan ruins. The guided tour of Copán, the tunnels, and the extensive museum allows students to understand some of the long history of Honduras and the cultural influences on the people who live there. The bus ride to Copán also provides a chance to see the different geography and living conditions in the west of Honduras.

The Beach and Puerto Cortés

The group sometimes ventures out to a beach near Puerto Cortés. A tour of Puerto Cortés and the surrounding region provides students with a graphic indication of the impact of free trade zones on the economy and the people of the area.

In Tegucigalpa the group sometimes has the opportunity to interact with students and teachers from the university who can answer questions about the country and provide group members with information that helps them understand what they have seen and experienced.